Spend two hours getting acquainted with some of the Swiss landscape's most magnificent features on the Lucerne-Interlaken Express. This 60-mile rail line extends through a picturesque region of the Swiss Alps bookended by lakeside Lucerne at one end and Interlaken in the Bernese Oberland on the other. Along the way, passengers are left in awe as the train meanders through enchanting mountainside villages and passes by no less than five pristine lakes, all filled with sparkling blue-green water.

As the train leaves the station in Lucerne, the track immediately skirts the foot of Mount Pilatus and follows a course along Lake Lucerne's shores. Attractive villages punctuate the lakeside and lead through the hills toward two more lakes: Sarnersee and the Lungernsee. The Lucerne-Interlaken Express continues past rushing streams and breathtaking waterfalls in pursuit of the highest reach on the line, the Brünig Pass, at over 3,300 feet. The train uses cogwheel technology to make the steep descent to Meiringen in the Aare Valley. Meiringen is simply charming, with its surrounding meadows and lovely old buildings. The village is known as the birthplace of meringue and where beloved fictional character Sherlock Holmes died.

Pressing forth, visions of traditional wooden chalets and expansive alpine meadows overtake the landscape as the train changes directions and proceeds through the Hasli Valley. Rich green forests and snow-capped mountain peaks join the vistas and compose an idyllic scene of Switzerland. Rich cerulean waters break on the horizon, and Lake Brienz comes into view. The Lucerne-Interlaken Express passes through the town of Brienz not long before arriving in Interlaken. 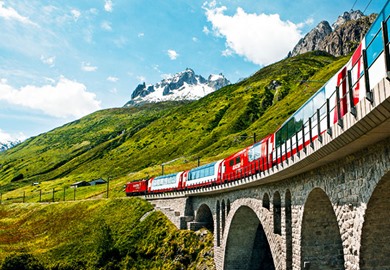 Escorted
Best of Switzerland by Rail 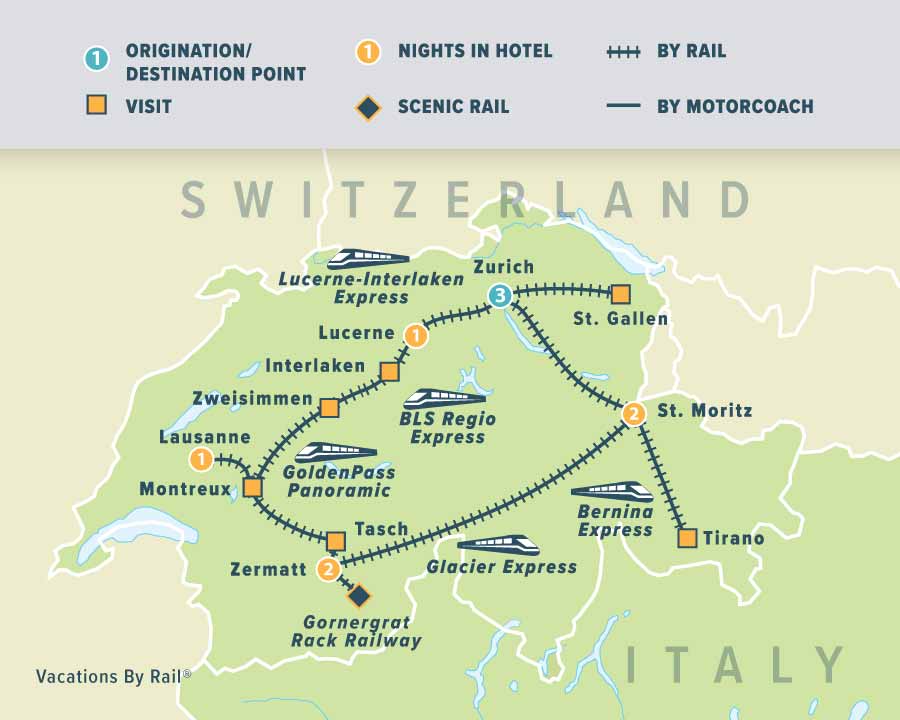 “Very interesting and enjoyable.
Collected by Vacations By Rail