The Coast Starlight runs on the 1,390-mile (2,237km) route from Los Angeles to Seattle, taking its passengers along the shores of the Pacific Ocean, through lush, green valleys and impressive mountain ranges. On our USA Coast to Coast holiday we travel just a short section of this journey from Los Angeles to San Francisco.

LA to the Pacific Coast
Our journey begins in Los Angeles Union Station, which opened in 1939 and is a blend of Spanish and Art Deco architecture. Leaving the urban sprawl of Los Angeles behind us, we travel past the famous Forest Lawn Memorial Park, the final resting place of many of Hollywood's famous names including Humphrey Bogart, Errol Flynn and Walt Disney.

After passing through Glendale we reach the city of Burbank, home to many of the biggest film studios including Warner Brothers, Disney and Columbia. We continue through the San Fernando Valley towards the Santa Susanna Mountains and the Simi Hills, and travel along the narrow Simi Valley towards the Pacific Coast and the city of Oxnard. We finally reach the Pacific Coast at Ventura, at which point the Coast Starlight begins to head north, hugging the coastline and following the Pacific Coast Highway. We enjoy spectacular views of the ocean and the long stretches of golden, sandy beaches, as well as the islands of Santa Cruz and Santa Rosa.

Santa Barbara to San Francisco
The train makes a stop in Santa Barbara before continuing along the coast, passing the Point Conception Lighthouse and crossing the high trestle over Jalam Beach Park, just before it crosses the Vandenberg Air Force Base. We travel alongside the famous Pismo Beach and then begin to head inland to San Luis Obispo. Shortly after leaving the city, we cross the Stenner Creek Trestle and begin to ascend 1,000 feet in 11 miles to the Cuesta Pass. We travel through cattle ranch country to Paso Robles and then onwards through the Salinas Valley, past 18th century mission towns and the Diablo Mountain Range to Salinas.

The final stage of our journey takes us through Castroville, the 'artichoke capital of the world', Gilroy, the 'garlic capital of the world' and the beautiful Santa Cruz Mountain Range. We make a stop in San Jose, the first state capital of California, before reaching our destination, the vibrant city of San Francisco. 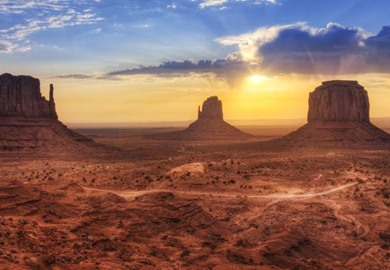 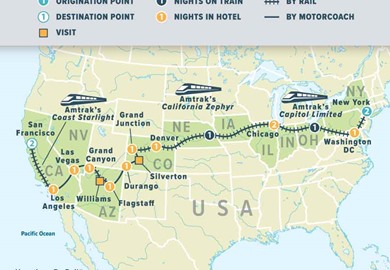