With its eclectic atmosphere and lush surroundings, Canada's western-most province, British Columbia, has something to offer every visitor. Thrills are as bountiful as are the changes in the landscape, making this Pacific Coast destination a great place for city slickers, historians, nature lovers, and connoisseurs of fine wine alike. British Columbia tours present the best of these contrasts and allow travelers to experience each region's nuances. A voyage that showcases British Columbia cities may feature Vancouver, with its vibrant culinary scene and wide range of museums and cultural delights. A visit to Granville Island Public Market is not an experience that is quickly forgotten.

Further, a Vancouver vacation may include time on Victoria Island, home to Butchart Gardens and Craigdarroch Castle. Venturing north from the Vancouver region takes visitors into the vibrant coastal rainforests and to the resort town of Whistler in the Coast Mountains. British Columbia tour packages that reach even further up the coast may highlight Prince Rupert's wildlife preserves and stunning beaches or travel inland a bit to showcase Prince George. Traveling south from Vancouver opens an entirely different type of scenery in the fruitful Okanagan Valley. One of Canada's premier wine regions, the valley is ideal for group tours and independent adventures to vineyards, wineries, and orchards.

British Columbia also serves as a gateway to the grand scenery of the Canadian Rockies. This mighty mountain range skirts the border between British Columbia and Alberta and is a favorite of travelers seeking dramatic scenery. Two fantastic rail lines offer easy access to these stunning mountains and the national parklands surrounding them: VIA Rail's Canadian and the Rocky Mountaineer. Both trains begin their journeys in Vancouver and then proceed inland toward Kamloops before continuing to either Jasper or Banff, depending on the itinerary. Whether discovering the province aboard one of these trains on a collection of small group guided tours or embarking on an independent rail vacation, visitors are sure to feel inspired by the breathtaking scenes of British Columbia. 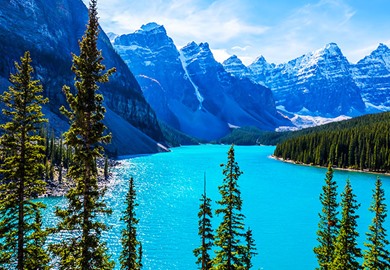 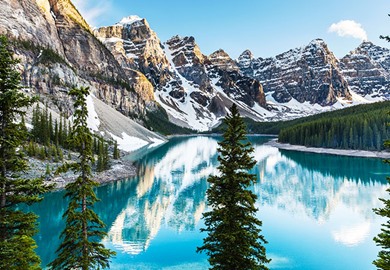 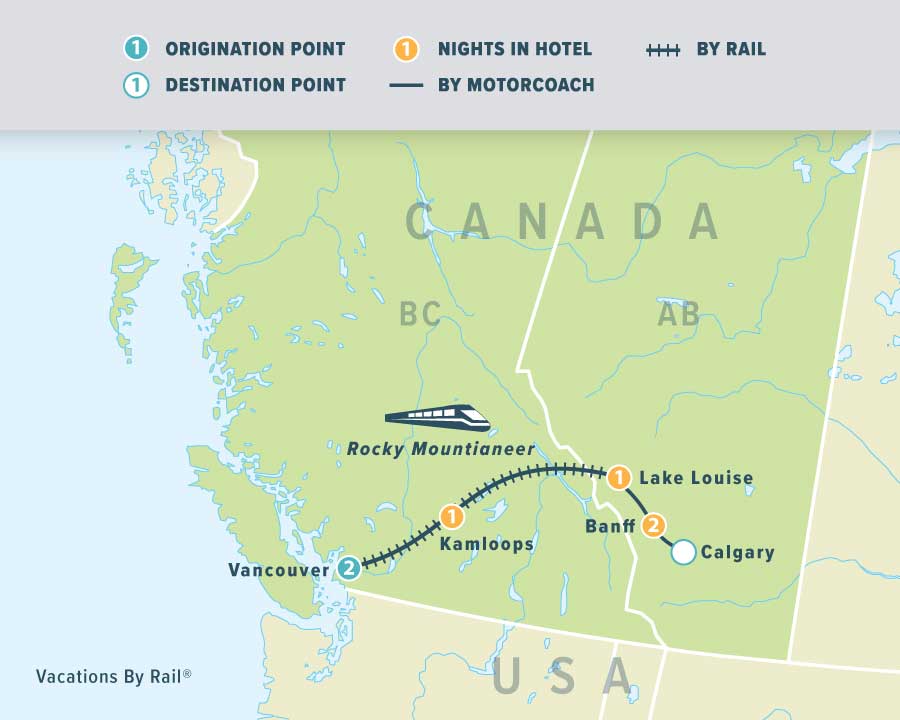 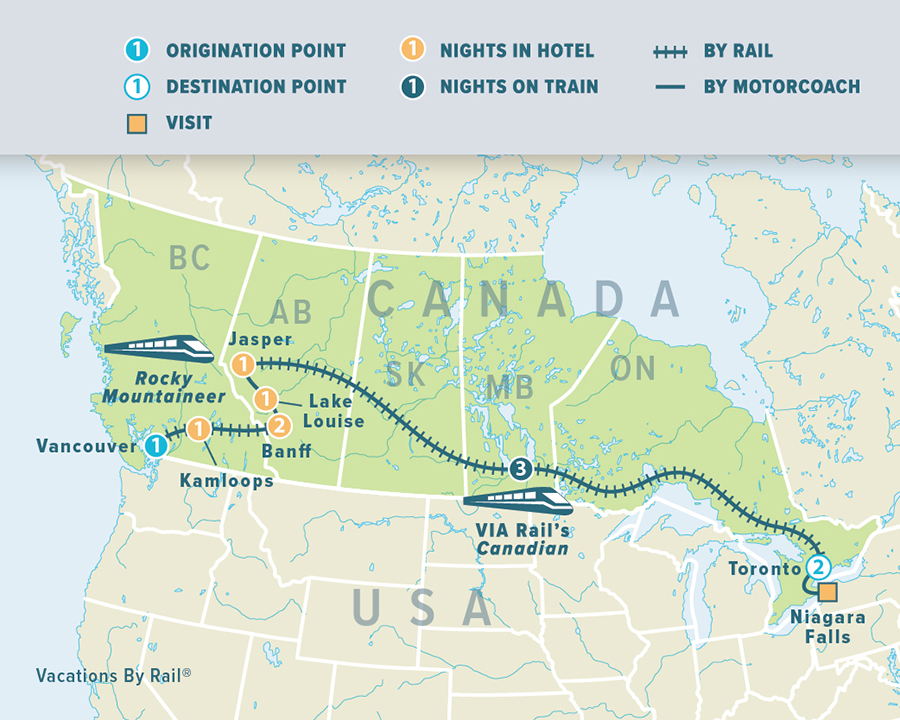 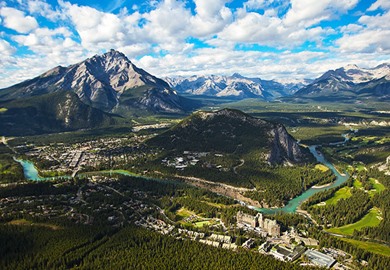 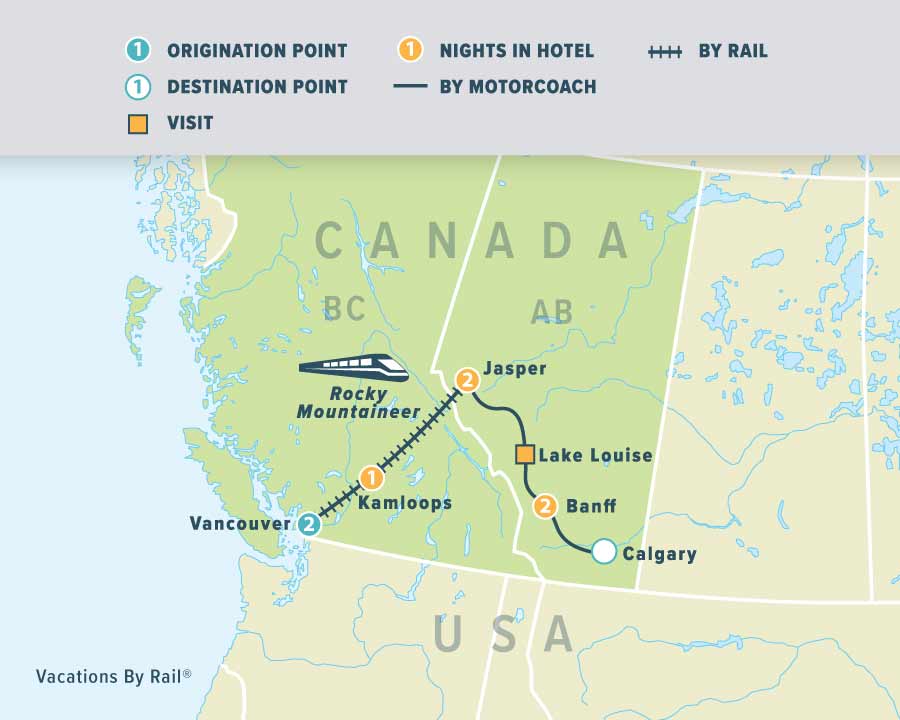 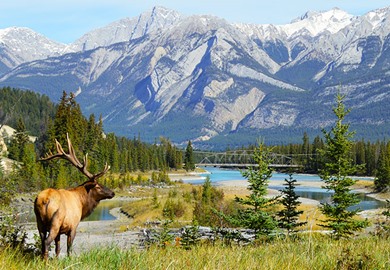 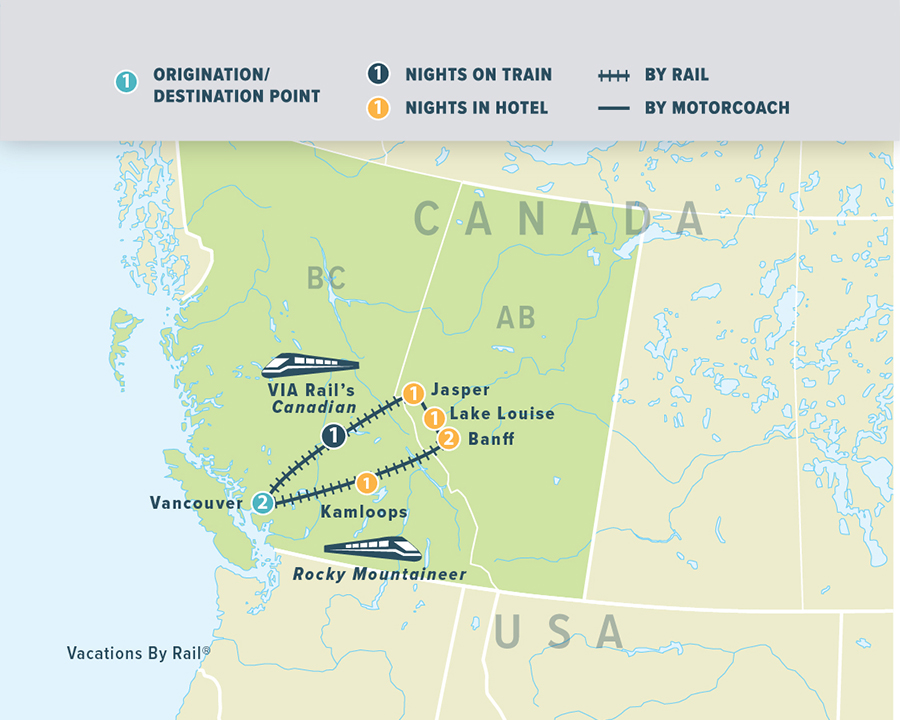 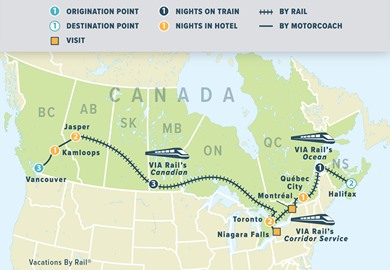 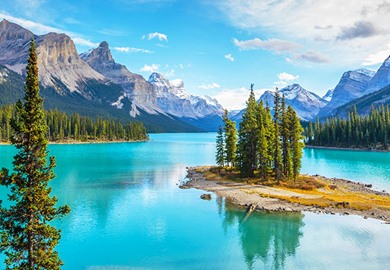 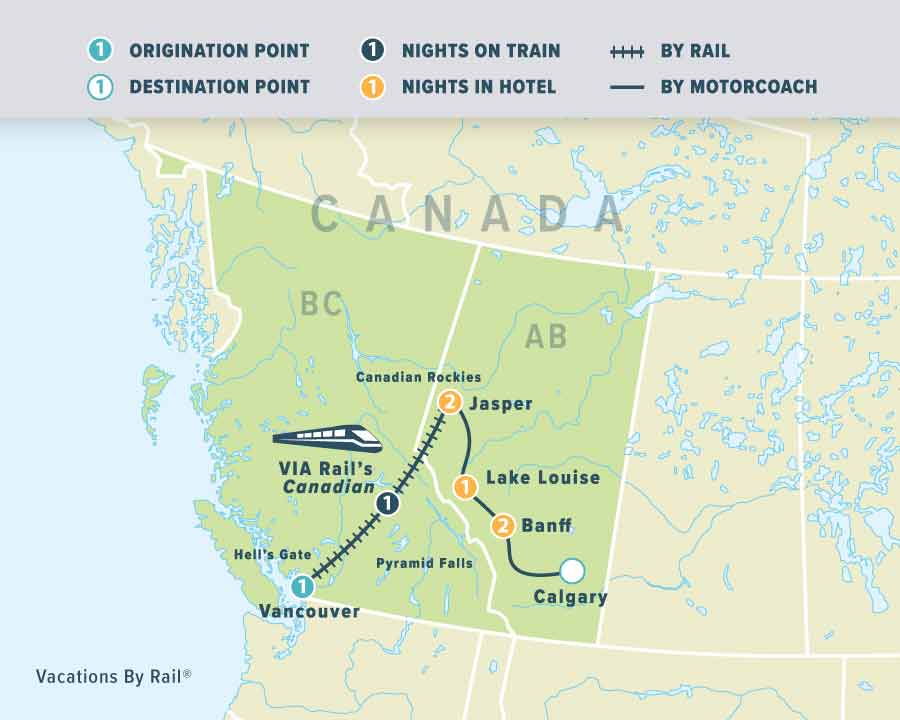 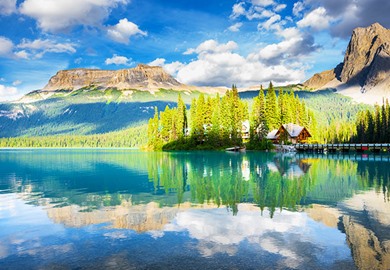 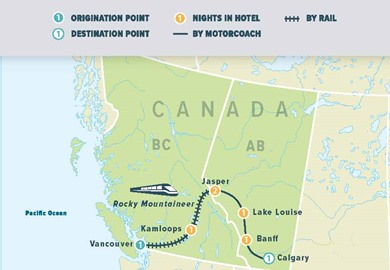 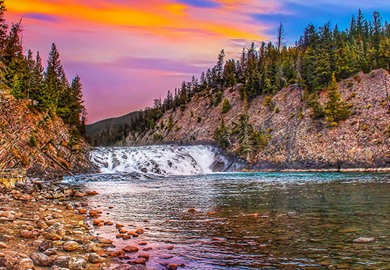 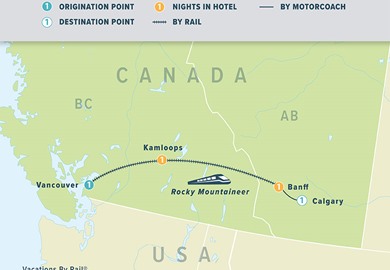 “We really enjoyed our trip it was our 1st on a train so we got to know what we liked and don't like. Food on train was fantastic, met a lot of new people. 1st time on a guided motorcoach tour and we really enjoyed it, made it really nice for my husband as he normally does most of the driving he actually got to sit back and enjoy the sites. Would recommend this to my friends and family. Looking for our next vacation. Our motorcoach guide was wonderful, full of places to see and her knowledge of the area was great.
Collected by Trustpilot
Trans Canada By Rail Featuring VIA Rail's Prestige Class
MARY KATHLEEN DUNCAN

“I have been looking forward to this trip since 2020. It did not disappoint. One has to remember that Vacations by Rail is a travel agent, not a tour company. This trip is "independent" travel of sorts in that you don't have a guide doing things for you. Shortly before your departure date, you receive a final itinerary along with vouchers for hotel rooms, tours, train travel, etc. You are responsible for getting to the appropriate places on time. No big deal as long as you don't expect a tour guide to take care of you. You will be with many of the same people throughout your travels so you have the opportunity to make friends along the way. The Rocky Mountaineer portion was a wonderful experience. I would recommend getting a seat on the left side of the train (we sat on the right side) as 98% of the points of interest were on the left. We booked the Gold Leaf service and I would recommend it. Sitting in the elevated dome car gave you an awesome view of the Rockies and surrounding area. The hosts (upstairs and downstairs) were excellent - efficient, helpful, informative. The meals (breakfast & lunch) were tasty and filling. You were also offered snacks and beverages throughout the day. It was nice going down to the dining car to eat meals and sitting with new people. There were 750+ people on our train. If you are traveling with someone, you'll need to make sure it's noted somewhere so you'll be assigned to the same train. The hotels (we booked all Fairmont Hotels except for in the one in Kamloops which Rocky Mountaineer booked) were first class. Our view of Lake Louise was stunning. The Fairmont in Toronto was right across the street from the Toronto train station. The Brewster Sightseeing tours (in Banff, between Banff/Lake Louise, and Lake Louise/Jasper) were all informative; and, the guides/drivers-guides were friendly, patient, and fun. I wish the Niagara Falls tour company was more flexible with what was covered. I would have liked to spend more time at the Falls themselves. That tour gave us a spectacular view of the Falls...on land and on the water. That sightseeing company was a bit disorganized as they told people the incorrect departure time and didn't specify a location (the hotel wasn't sure either)...but it all turned out fine. I love train travel so I enjoyed the VIA train from Jasper to Toronto. Some people did not realize that the bags they checked were not accessible until they reached their final destination. The rooms are much too small to accommodate full-sized luggage. We had a Sleeper Plus for two people. It had a toilet (in a separate small room) & a sink. The bunk bed are set up/take down by the room steward daily (we elected to keep them down) since we occupied the public areas during the day. Breakfast is first come, first serve. Lunch and Supper are scheduled - there are 3 seating times for each (you reserve your first dinner slot at the station in Jasper before you board the train.). The customer facing staff from Jasper (they started in Vancouver) to Winnipeg were outstanding. They were so efficient, friendly, and knowledgeable; the staff from Jasper to Toronto were fine, but not outstanding. I would have appreciated having transport arranged to take us from the hotel in Toronto to the airport. We weren't told that the arranged transport wasn't available early in the morning. There should be a note stating the hours of availability so customers can schedule their flights accordingly. The Toronto airport has been experiencing personnel shortages so it is a mess. They really mean it when they say get there 3 hours in advance. People should know there is a phone number they can call to speak to someone at the airport. That person can confirm the departure terminal and how early folks need to arrive. Remember, if you're returning to USA, you go through Border Patrol screening to clear travel into the USA in Toronto. Having NEXUS or Global Entry eased the chaos. NOTE: tips are not included. I hate having to figure out tips. The travel guides usually recommend you tip a certain percentage of what you paid. It's helpful to figure that out before you leave home. We tipped at the table during meal services but there are many others who rely on tips to augment their wages - hosts on Rocky Mountaineer, guides/drives on tour buses, staff on the VIA train, porters, etc. I'm recommending this trip to my friends. I would book with Vactions by Rail again.
Collected by Trustpilot
Canadian Rockies Featuring Banff & Lake Louise
SUSAN TOOMSEN

“The Rocky Mountaineer from Vancouver to Banff was beyond wonderful. Totally met our expectations. Superb service and food. Staff could not have been nicer. Everything scheduled perfectly and carried out very well. We'd recommend.
Collected by Trustpilot
Canadian Rockies & Rocky Mountaineer
DEVILLO BOLL

“Train and Hotel staff service was excellent, luggage always arrived in our room at every stop. Food service and quality was also excellent!
Collected by Trustpilot
Trans Canada By Rail with Jasper
ROBERT NEEL

“Even though there was a slight mis-cue at the beginning, the overall product was worth the effect and cost. We enjoyed both the rail trip and the stays at Vancouver and Jasper, they were all top ranked in anyone's book. Staff was highly supportive at all venues.
Collected by Trustpilot
Latest Expert Advice & Inspiration

Using careful planning, consideration of your travelers’ goals, and this guide, it is simple to identify the best escorted rail vacation for your group tour.