A small Bavarian village renowned for its woodworking craftsmen, Oberammergau is unassuming and a quintessentially German locale. Visitors to the village enjoy a look at traditional architecture, as well as those homes that feature Lüftlmalerei, or intricately painted decorations on the facade. There is a beautiful parish in Oberammergau, and looming over the village is a single mountain, the Kofel. There are shops and eateries, as well as stunning views of the Alps and the River Ammer. Perhaps the unique thing travelers see when traveling through this Bavarian gem is the number of religious artifacts. Some of the Lüftlmalerei on the homes feature Bible stories, and depictions of Christ's crucifixion can be seen throughout the picturesque village. While this may seem strange, in fact, it is quite in keeping with what the village is most known for, the Oberammergau Passion Play.

During the time of Bubonic Plague, the villagers of Oberammergau made a plea to God. Spare them from the dreadful plague, and they would perform a play every ten years depicting the passion of Christ. The plague was sweeping across Germany, and Europe as a whole, at the time, and a traveler accidentally brought the plague into Oberammergau around Christmas in 1632. He died, and many of the townspeople were infected because of him. The death toll in the village was devastating, and as such, the vow was made. Not a single person died after that - many even made full recoveries. Figuring that their prayers had been answered, the villagers held true to their word, and the first Passion Play was performed in 1634.

Based on 15th and 16th-century plays and performances, the Oberammergau Passion Play has roughly followed the same outline since it began nearly four centuries ago. The play begins with Adam and Eve and continues through Jesus entering Jerusalem, the Last Supper, the condemnation of Jesus by the High Council and finally his death upon the cross and resurrection. In all, the play lasts approximately 5 hours - beginning at 2:30 p.m. and continuing until 5 p.m., then breaking for dinner and resuming for its final stretch between 8 and 10:30 p.m. One thing first-time patrons are typically surprised about is the importance of music in the play. Since its very first performances, music has been used heavily to aide in the storytelling. The music, orchestra, and vocals have been reworked and many times throughout the years to stay in keeping with the ever-changing nature of theater.

When the play first began in the 1600s, the performances were held in the cemetery, right over the graves of those who fell victim to the plague. The surroundings seemed appropriate, considering the reason for the play. The stage was a simple wooden structure, yet its design allowed it to play host to the productions until the early 1800s. It was in 1830 that the stage for the Oberammergau Passion Play was moved to the theater's current location. Over the course of the next 100 years, the stage was rebuilt twice, a covered spectator area was added as well as theater seating for 5,200 visitors. Over 150 years later in the 1990s, it was clear time had caught up with the theater, and once again, it underwent renovation. Wheelchair accessibility was added, the stage equipment was upgraded, restroom facilities were improved, floor heating was put in place, and the seating structure was reworked to make comfortable, covered seating for 4,720 guests. Today, the outdoor theater remains a testament to innovation and careful design. 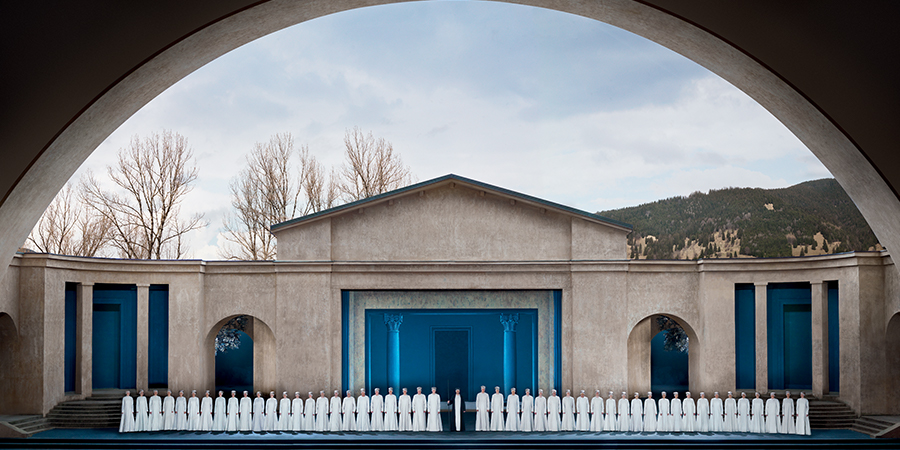 Much like the plays of years past, the Oberammergau Passion Play 2022 will be performed in the theatre solely by residents of the village. There are strict requirements to be a part of the play, including either being born in Oberammergau or living there for 20 years. There are approximately 2,000 roles to fill between actors and support staff, and male actors must grow their beards and hair out - sometimes beginning up to 1 year in advance - to ensure their look is accurate. All of the costumes for the plays will be handmade, just as they have been since the beginning. This 42nd Passion Play will run from May 14 until October 2 in 2022 for 102 planned performances.

Vacations By Rail offers a variety of packages that highlight this incredible event. Select from packages that give a glimpse at Germany or those that combine two or more countries, such as Germany, Austria, and Switzerland. Our European Whirl With Oberammergau offers travelers an even more in-depth look at Europe, visiting countries such as the United Kingdom, Belgium, Germany, the Netherlands, Italy, and France, in addition to providing a full day to soak up the culture of Oberammergau and to enjoy the play. All of the scheduling, travel and ticket purchasing is left to us - all you have to do is prepare for the experience of a lifetime. Contact a Rail Specialist to learn more about our Oberammergau packages for this 2022 Passion Play production.

Five Things to See and Do in Banff in the Winter

From capturing the snowy beauty of the Canadian Rockies on skis or a snowboard to sightseeing, discover five things to do in Banff during the winter.

In Western Canada select from three uniquely scenic routes traveling between Vancouver into the heart of the Canadian Rockies with its stunning national parks and charming mountain towns.

Following a route that takes travelers from the heart of the Canadian Rockies in Jasper to the beautiful port town of Prince Rupert is VIA Rail's Jasper-Prince Rupert Train. Discover these five facts so you can make the most of your trip

Let us take the lead in planning your next family vacation by choosing one of these family-friendly rail vacations in Canada.