Your Guidebook to the Best Time of Year to Visit Alaska

With more than 6,600 miles of beautiful coastlines and a vast 365 million acres of land, Alaska is a state that has called to adventure seekers, nature enthusiasts, and lovers of all things scenic for centuries. The first modern inhabitants came seeking their fortunes in gold and created the towns the state is best known for today. This development only accounts for a small fraction of the state's overall landmass, allowing Alaska to remain rife with untouched wilderness and awe-inspiring scenes. It is no wonder that trips to Alaska top many travelers' bucket lists and that Alaska vacations are known for their adventurous flair.

Are you trying to decide the best time to visit Alaska for your next trip? Follow this handy guide to make your journey one that lives fondly in your heart and memories for years to come.

Before We Get Started, a Note About Alaska’s Weather

Because of Alaska's massive size, it is often divided into five specific regions: Southeast, Southwest, South Central, Interior, and Far North/Arctic. With each area comes a distinctive climate and set of environmental standards. Moving from place to place can change the temperature, the weather, and even the amount of daylight hours you experience. Trips to Alaska that cross multiple regions are subject to the variabilities that come with the landscape, however minor or major they may be. 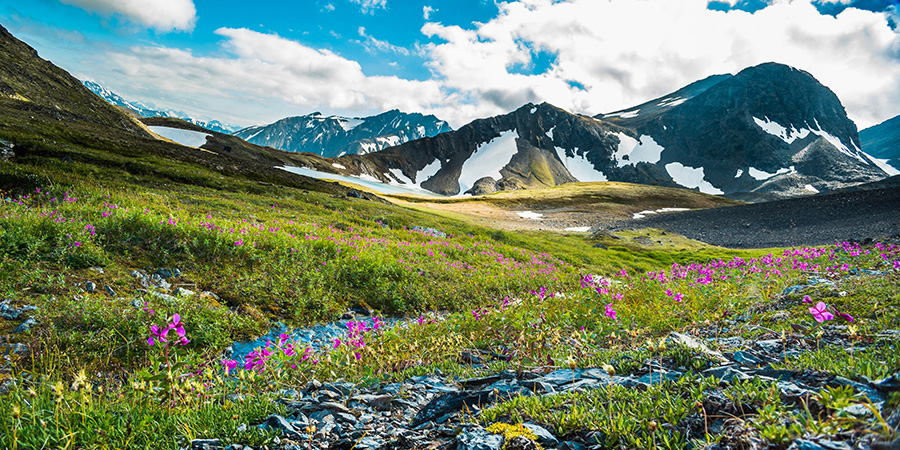 Many Alaskan tours take place during the summer travel season - typically late May until early September. True summer, though, doesn't begin until June, peaks in July, and wraps up in August. Summer temperatures in the coastal regions top out at about 65 degrees Fahrenheit, whereas the Interior sees higher numbers, often reaching the 70s and, on occasion, soaring into the 90s. This weather makes it comfortable to be out on the water, perhaps cruising through Kenai Fjords National Park, and provides a wonderful setting for exploring on land.

It is generally dry during the summer. Most of the snow has long melted away by June, leaving white powder only upon the highest mountain peaks. When August rolls around, the rainy season begins again, followed by months of snow. That is not to say that August is a poor time to visit, of course. The last month of summer offers fewer crowds and shorter days if you are someone who needs darkness for sleeping.

Things to do During the Summer on Alaska Vacations

June ties with July for being the best month to visit Denali National Park. The roads in the park officially open in June, and, luckily, at this point, most of the animals have shaken off their winter stupor and are active throughout the park and the rest of the state's untamed expanses. If you visit Alaska for wildlife, prime bear viewing falls between late May and the end of July. Luckily, whale watching season coincides with this window. During the warmer months, minke, humpback, gray, and killer whales all inhabit Alaska's waters; however, some species can be found here throughout the year. The weather is perfect for a whale-watching cruise in June and July.

One of the unique things to do in Alaska during the summer is wait out the sun. Alaska is often called the Land of the Midnight Sun for a good reason. As spring clears and rolls into summer, the days get longer and longer. By the time the summer solstice, June 21st, rolls around, you can enjoy up to 18 hours of daily sunlight in Juneau and up to 22 hours daily in Fairbanks.

With the sun refusing to set and all the valleys and coastlines consumed by vibrant shades of green and wildflowers of every hue, the summer panoramas are unmatched. A ride aboard the Alaska Railroad is one of the best ways to experience the wild terrain for which Alaska is best known. Other ways to experience the state's glories include hiking, mountain biking, scenic boat rides, and flightseeing. 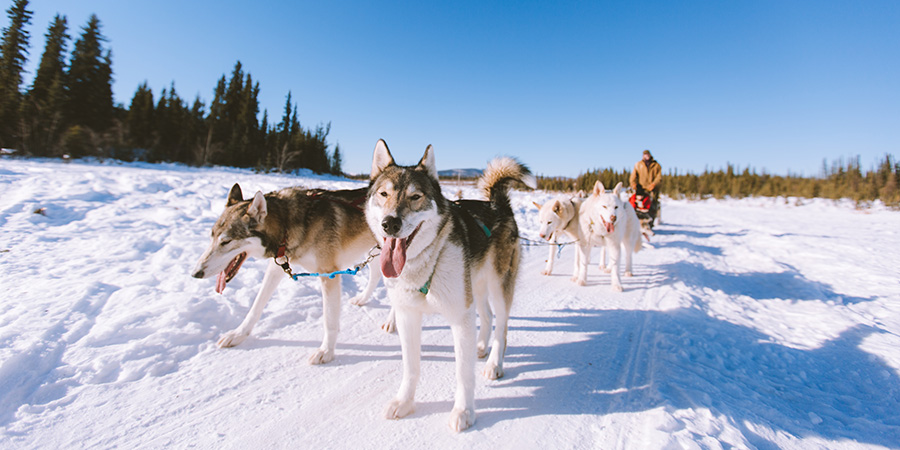 Alaska vacations in the winter could fall between October and March, with the first snowflakes typically gracing the Interior's mountains in mid to late October. This chance of snow increases as the weeks wear on, turning Alaska into a total winter wonderland by December. Throughout the winter season, Juneau in the Southeast may see nearly 90 inches of snow; Anchorage in South Central, up to 80; Fairbanks in the Interior averages about 60, and Bettles in the Far North can get up to 100 inches. It gets drier the further into the arctic circle you get, as Alaska's Arctic is technically a desert. The season's final snow flurries typically fall - and have melted - by April.

The temperatures are wildly different between regions, as well. The Southeast offers the mildest variations of the Alaska seasons, with places like Sitka and Ketchikan boasting climates similar to that of Seattle. Fairbanks sees much more extreme weather on the other side of the spectrum, with lows often falling into the negative range. Further into the north, in places like Bettles, the land can regularly see double-digits below zero degrees Fahrenheit for the low temperatures. Daily highs remain the lowest single digits. Alaska in December is frigid cold for most of the state, with the temperature dropping more into January and beginning to warm slightly in February. There is no better place in the United States to experience the truest definition of winter.

Things to do in the Winter on Alaskan Tours

Despite the relentless cold of the winter months, there is something so beautiful about the calm aura snow lends to everywhere it falls. Pair this with millions upon millions of acres of untouched land, and you have a recipe for some of the most fantastic winter scenes imaginable.

Believe it or not, winter is also a great time to view animals. While riding between major cities on the Alaska Railroad or venturing from destination to destination aboard a deluxe motorcoach, keep your eyes peeled for moose, Dall sheep, mountain goats, and even wolves. Eagles soar overhead during the winter travel season, particularly in the Southeast and South-Central regions.

The Alaska people are a hearty bunch that likes to get out and experience the great outdoors even when the temperatures plummet below freezing and the daylight hours are fleeting. By mid-December, Juneau sees just over six hours of sun, whereas cities further north, like Fairbanks, have less than four hours of sunlight. Continuing north past the arctic circle, Barrow does not see the sun for the 67 days between mid-November and late January. As the daylight hours increase, so too do the opportunities to get out and explore. Snowshoeing, snowmobiling, and cross-country skiing are all popular pastimes. Dog sledding is not just a sport, but rather, it was once a way of life for people who lived in the furthest reaches of the state. It remains a popular activity today, and select Alaska vacations include interactions with sled dogs. Ice fishing is yet another way Alaskans keep busy during winter.

Perhaps the most popular of the winter activities in Alaska is chasing the elusive yet spectacularly beautiful aurora borealis. In fact, Vacations By Rail offers tours, such as the Aurora Viewing at Bettles Lodge expedition, that focus on this natural light show. The northern lights in Alaska are visible throughout much of the year, beginning in late August and extending through April. Despite this, they are most visible during the winter when there is much less daylight and more opportunities to catch a glimpse of the greens and reds dancing across the sky. 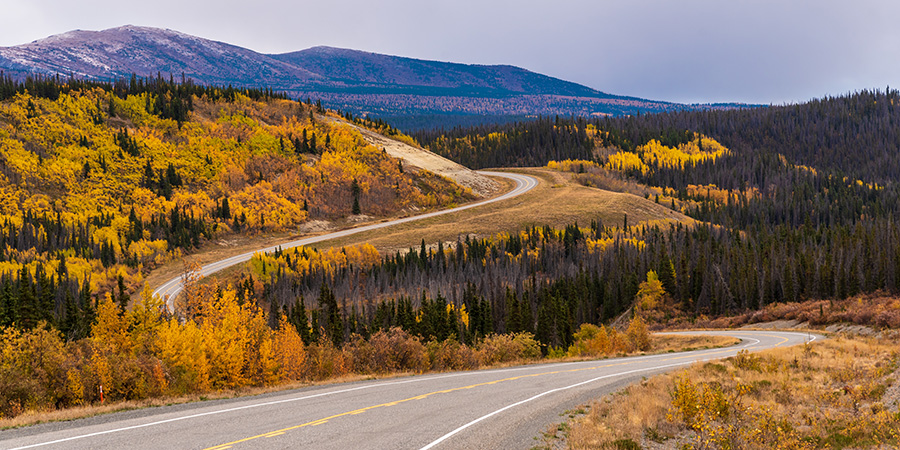 Between Alaska's two main seasons are shorter shoulder seasons that are ideal for travelers looking for milder weather and smaller crowds. The days are not as extreme - in daylight or temperature - and there is much to do and see.

Traveling to Alaska in March is the best time to catch the beginning of the first of the shoulder seasons. By this point, the daylight has increased to up to 12 hours in some parts of the state, and while there is still snow, it is no longer falling as frequently. By April, much of the snow has melted, but the soggy ground means it is not quite time for summer activities. Still, activities like cruising the Inside Passage or visiting Gold Rush towns become much more comfortable. Alaska in May is a time of awakening and growth. The days become longer still, and the weather levels out. Cruise ships start arriving more frequently, and such begins the peak summer travel season.

There is another shoulder season in the fall, beginning in late August when the first of the Alaska fall colors sneak into the panoramas and peaking in September. This time of year can be rainy and cool, but it is also an excellent time to get out and explore before the temperatures drop further. In addition to colorful fall foliage, August and September also bring the return of the northern lights. The last cruises leave the harbor for the year, and Denali National Parks roads close. Even with the park being closed, there are still plenty of picturesque places to hike. An additional bonus of this shoulder season: There are very few - if any - bugs to deal with as you explore.

When considering Alaska vacations, think about what you hope to accomplish during your time in America's Last Frontier. If your answer lies in waterway cruising, scenic tours, and bear viewing, the summer months may be for you. On the other hand, if it is the northern lights and impressive snow-covered mountains you seek, the winter is perhaps the best time for you to visit Alaska. Consider your options with a trained Rail Specialist by contacting Vacations By Rail today.

Five Great Canada National Parks You Can Reach By Train

Join an adventure that is certain to leave a lasting impression and keep you inspired when you venture into one of these five Canada national parks by train.