5 Tips for the First-Time Swiss Train Traveler (Part I)

Sparkling lakes. Snow-covered peaks. And cow-dotted valleys. Traveling by train in Switzerland is one of life's most pleasant experiences. Follow this quick guide so your journey aboard the Swiss rails will meet any expectations-even those as high as the Alps. Don't forget to check 5 Tips for the First-Time Swiss Train Traveler (Part I) and  Part III too. 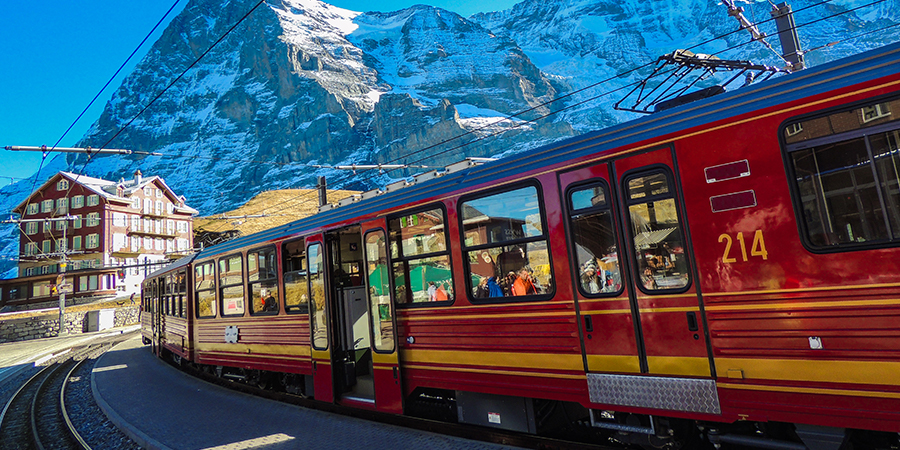 1. Buy your ticket before boarding

Buying a ticket from a Swiss train conductor is not a common practice-unless you enjoy getting a fine along with your ticket. Tickets are available before boarding trains at ticket machines and at ticket counters. Fines for traveling without a ticket are around $100.

2. Buy your bike, dog, or child a ticket too

In Switzerland, more things than you need a train ticket. These include your bike, your dog (if it isn't small enough to sit in your lap), and your child (if she's 6 years or older). So before you board, make sure you and your accompaniments have the tickets they need. When in doubt, check at the ticket counter. Most public-facing Swiss train employees speak English.

The Swiss train system may be the only one in the world that publicly apologizes should your train be a minute or two late. That's because such occasions are rare. The Swiss are known for punctuality and their trains are no exception. If you've never regretted your tardiness, Swiss trains have a way of introducing you to the concept. If the train says it departs at 9:52, it will do just that.

Swiss trains are divided into first and second-class cars. Check your ticket and make sure to sit in the corresponding train car, as fines are imposed for second-class ticket holders who ride first class. Before the train arrives, check displays of your train's layout on platform screens so you can stand in the perfect place to board the train for your ticket class. Sections A, B, C, and D represent different areas of the train platform. The display should show which train class corresponds to which letters of the platform. If second class is in Section C, find Section C and stand in that area. When the train arrives, you'll see that Swiss train cars are marked with 1s and 2s both inside and outside, so you can ensure you're in the right car. And don't worry; because Swiss trains are of such high quality, even riding second-class in Switzerland is a first-class experience.

Something as simple as opening doors-if you're not informed, traveling in a new country can make such a concept complicated. Almost all Swiss trains have buttons on the doors and you must press these to open the doors, whether you're boarding or disembarking. In most cases, doors will not open automatically (although they do close automatically).